Florida Southern College has posted their 2018-2019 Florida Lecture Series schedule and it looks like some good speakers are lined up. Lectures start at 7pm and will be at different locations on campus. Click the link at the bottom of this post for more information and specific campus locations.

Speakers and topics include:

March 21, 2019
John Capouya (Professor of Journalism, University of Tampa)
“Florida Soul: From Ray Charles to K.C. and the Sunshine Band”

For more information visit the Center for Florida History website.

During our recent vacation we had the privilege to see the play Pressure performed at the Ambassadors Theatre in London. Written by, and starring, David Haig, Pressure tells the story of Scottish meteorologist James Stagg and his role in convincing Allied Commander Dwight D. Eisenhower to postpone the D-Day invasion due to deteriorating weather conditions.

in their effort to push back German troops and ultimately regain control of France and the continent. American meteorologist Colonel Irving P. Krick, portrayed by Phillip Cairns, however has the ear of Eisenhower, portrayed by Malcolm Sinclair, and Stagg must overcome the influential and charismatic American. If Stagg is correct thousands of lives, and perhaps the entire mission, is saved. If he is wrong the Germans might get wind of the invasion, send reinforcements, and be in a position to defend the coast.

It is hard to imagine that anybody attending the performance doesn’t know Eisenhower’s decision. He ultimately sides with Stagg, who is proven correct as the weather turned dramatically for the worse. D-Day was pushed back to June 6 with the Allies ultimately being successful in penetrating the coast of France which helped lead to the final victory over Nazi Germany.

While Stagg comes off as gruff and difficult, his more delicate side is shown in a sub-plot revolving around his wife’s pregnancy. An earlier birth was difficult and Stagg has received word she is showing the same signs this time. What started out as a rocky relationship with Kay Summersby, portrayed by Laura Rogers, who is Eisenhower’s chauffer, turns to friendship and respect with Summersby providing support for the overburdened Stagg. 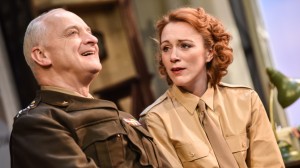 Playwright Haig also hints at the often discussed relationship between Eisenhower and Summersby. Whether there was ultimately a physical relationship will never be decided. There is not an agreement from those who knew both as to what their relationship was.

I found the storyline interesting and well done. The performers did a great job. The setting is an intimate one. The theatre itself was nice and it did not seem like there was a bad seat in the house. We were towards the rear of the theatre but had no vision or sound problems. Ticket prices for our seats were more than reasonable at only $15.

While a play about 1944 weather probably isn’t one that would immediately attract the interest of most people, I would say don’t miss this one.

All photos are from the play and are not my own.

“A really well researched book. This book tells about the nationalities of the soldiers who were in the American Army in the First World War. It tells us where they were from, where they fought and what happened to them. This is a fascinating read about bravery and men who sacrificed so much to fight for a country they wanted to belong to. This is a fascinating and insightful read” – NetGalley reviewer.
This book covers the entire spectrum of military service during World War I. It gives examples, including many photographs, from almost every ethnic and national group in the United States during this time. Including draft registration, induction and training, stateside service, overseas service, combat, return home, and discharge, learn the history of America’s foreign-born soldiers during World War I and how they adapted to military service to become part of the successful American Expeditionary Forces.

ABOUT THE AUTHOR
Alexander F. Barnes served in the Marine Corps and Army National Guard, retiring as a Chief Warrant Officer. He retired as a Department of the Army Civilian in 2015 and is currently the Virginia National Guard Command Historian. He holds a master’s degree in anthropology and has authored: In a Strange Land; The American Occupation of Germany 1918-1923 (2010), Let’s Go! The History of the 29th Division 1917-2001 (2014), To Hell with the Kaiser, America prepares for War (2015), and Desert Uniforms, Patches, and Insignia of the US Armed Forces (Schiffer Publishing 2016).Peter L. Belmonte is a retired U.S. Air Force officer and freelance historian. A veteran of Operation Desert Storm, he holds a master’s degree in history from California State University, Stanislaus. He has published articles, book chapters, reviews, and papers about immigration and military history and has been a college adjunct instructor of history. Pete has written two books: Italian Americans in World War II (2001) and Days of Perfect Hell: The U.S. 26th Infantry Regiment in the Meuse-Argonne Offensive, October-November, 1918 (Schiffer Publishing, 2015)

Thank you to my friends at Southern Illinois University Press for sending along a copy of Sixteenth President-in-Waiting: Abraham Lincoln and the Springfield Dispatches of Henry Villard, 1860–1861

Between Abraham Lincoln’s election in November 1860 and his departure for Washington three months later, journalist Henry Villard sent scores of dispatches from Springfield, Illinois, to various newspapers describing the president-elect’s doings, quoting or paraphrasing his statements, chronicling events in the Illinois capital, and analyzing the city’s mood. With Sixteenth President-in-Waiting Michael Burlingame has collected all of these dispatches in one insightful and informative volume.

Best known as a successful nineteenth-century railroad promoter and financier, German-born Henry Villard (1835–1900) was also among the most conscientious and able journalists of the 1860s. The dispatches gathered in this volume constitute the most intensive journalistic coverage that Lincoln ever received, for Villard filed stories from the Illinois capital almost daily to the New York Herald, slightly less often to the Cincinnati Commercial, and occasionally to the San Francisco Bulletin.

Lincoln welcomed Villard and encouraged him to ask questions, as he was the only full-time correspondent for out-of-town papers. He spoke with inside sources, such as Lincoln’s private secretaries John G. Nicolay and John Hay, devoted friends like Jesse K. Dubois and Stephen T. Logan, political leaders like Governor Richard Yates, and journalists like William M. Springer and Robert R. Hitt.

Villard boasted that he did Lincoln a service by scaring off would-be office seekers who, fearing to see their names published in newspapers, gave up plans to visit the Illinois capital to badger the president-elect. Villard may have done an even greater service by publicizing Lincoln’s views on the secession crisis.

His little-known coverage of the 1858 Lincoln-Douglas Senate race, translated from the German for the first time, is included as an appendix. At the time Villard was an ardent Douglas supporter, and his reports criticized Lincoln.

Not only informative but also highly readable, Villard’s vivid descriptions of Lincoln’s appearance, daily routine, and visitors, combined with fresh information about Springfielders, state political leaders, and the capital, constitute an invaluable resource.