Published 90 years ago today in the New Smyrna Daily News. 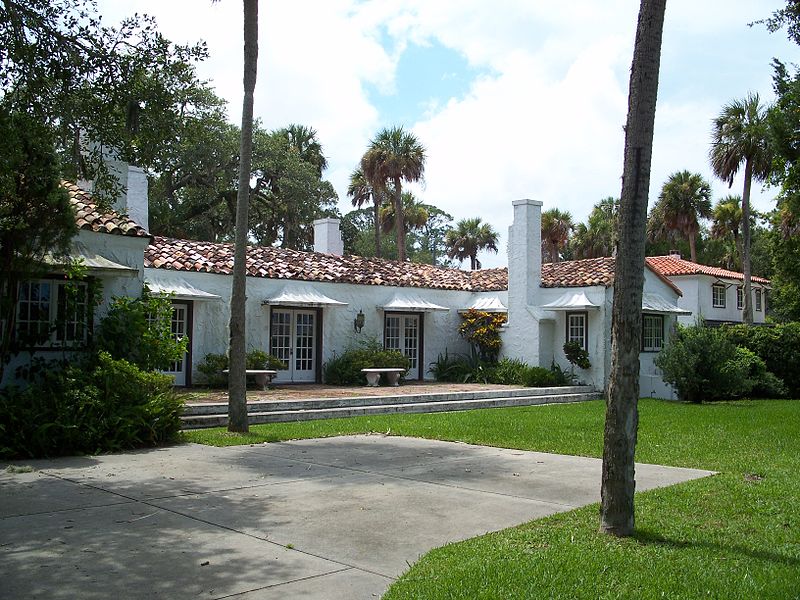 On the shores of the Indian River at New Smyrna, nestling in a beautiful palm grove with numerous varieties of other beautiful trees and shrubs, will be found one of the most picturesque homes in Florida, in fact one of Florida’s show places.

The house of Spanish architecture, was recently built by Robert Handley, who lavished great wealth as well as though in the construction and furnishing of this unique home, all of which is quite in keeping with its beautiful natural surroundings.

The house, which is over 200 feet in length, is constructed of heavy timber with stucco finish and an imported Spanish tile roof which lends immensely to the artistic beauty of the whole.

The interior of the rooms on the south section are tinted stucco finish all having hardwood floors, while those in the north wing are finished with pecky cypress having beamed ceilings and brick floors.

The music room is 60 feet long and 26 feet wide and is furnished with costly antiques and oriental rugs.

In our sauntering through the house we might possibly start in the bedrooms which are all spacious and beautifully furnished. Each room has a connecting bath. The windows are all casement type and each room looks out either over the beautiful front lawn with snatched glimpses of the river beyond, or on the picturesque patio which we will enter later.

The reception and writing rooms were illustrated and described in Vogue Magazine recently as follows: “The writing room in the new home of Robert Handley, Esq., brings exotic flavor of far off lands and untraveled seas with its pecky cypress walls painted lime green, rubbed with lemon yellow and decorated with lime green designs. The pilasters are all white rubbed with faint touches of yellow, blue, and green. The pottery and the Kashmir embroidered felt rugs repeat the color notes.

“The Arabian Nights, with all their glory, contained no more shimmering sight than a passage way of silver. The artist has prepared one room in Chinese silver and painted an intricate design of flowers and foliage, and the color scheme ranges from white through a full scale of green with touches of flame and pink. The floor is in moss green and the woodwork in green-black.”

We descend from the silver room down a slightly winding stone staircase of four steps, into the spacious dining room which is finished in gray stone and is on a level with the patio adjoining. The exquisite antique furniture of this room came from Spain, Italy, and England, some of it being centuries old.

There are two other similar winding staircases leading into this beautiful room, one from the patio itself at the south end of the room and the other from the butler’s service room at the west side, the stairs from the silver room being at the east side.

The paintings on the walls of the library by Robert Locher were illustrated and described in the 1925 issue of the House and Garden Magazine as follows:

“The library shown on these pages with its decorative painted wall and interesting woodwork, is in the home of Robert Handley, Esq., at New Smyrna, Florida. The panoramic design shows important incidents in the history of this section of Florida. One scene is the passing of the first southbound steamer. The contrast to the picturesque sailing ships above (illustrated) a present day ocean liner and a scene of a modern Florida beach. Florida in the 16th century, the time of the landing of Ponce de Leon furnished the inspiration for the designs around the fireplace.

The most decorative of the shipping episodes is the landing of Ponce de Leon. The figures, tropical foliage, and Spanish galleon are in various colors against a brilliant blue background. The view of the library (illustrated) shows the effective beamed ceilings. This and the trim are of cypress colored by a thin wash of blue-green.”

The entire house is abundantly supplied with costly and exquisite tapestries, oriental rugs, antiques, and vases brought from Europe and the Orient. The servants’ quarters and garage are built on the same Spanish type north of the house. The Faulkner Street side of the property has a nine foot stucco wall extending 344 feet across the length of the property. The front of the house faces the Indian River.

The trees, oleanders, palms, bamboos, and other beautiful products of Florida, make a bower of beauty of the front yard with the glimpses of the serene old Indian River to be seen through their branches, and at night the stars twinkling overhead making a veritable dreamland of the entire place.

One of the most attractive points of interest is the beautiful patio about 60 feet square and surrounded by a ten foot stucco wall which adjoins the house. The shrubbery, statuary, and tiled walks under the canopy of spreading branches of the majestic oaks and palms with their hanging moss, make one feel that he is in Paradise, especially on a moonlight night.

Mr. and Mrs. Frank Dick Bristley and daughter Genevieve, en route to Palm Beach last January, stopping here to pay a few days visit with friends. So impressed were they with New Smyrna and the climate that they decided to remain the balance of the winder. A few weeks later Mr. Bristley called to see the Handley home of which he had heard so much. As a result negotiations followed and the ownership and title in the Handley estate and its furnishings were transferred to Mr. Bristley.

Many improvements have been made since the new owners have taken possession, and it is their intention to make this their permanent winter home.

Mr. Bristley is a retired official of the Royal Baking Power Company of New York. The significance thereof was the dedication of this home March 15th, at their housewarming as “El Real Retiro” which is Spanish for “The Royal Retreat.”

One thought on “El Real Retiro: One of Florida’s Finest Homes”

Panther Falls as seen along the Angel-Panther Creek Falls Trail in #rabuncounty.
Unfortunately the @tycobbmuseum museum was closed due to #coronavirus concerns. We'll see it next time. If you are ever in #roystongeorgia be sure to stop here. You can also visit the final resting place of #tycobb just a short distance away. @mlb #baseball #georgia
We had a terrific self guided tour at @foxfireorg this morning. There are 20 stops on the tour and you learn a lot about living in the #appalachia region. These folks had a rough existence. If you go be sure to download the app. I will have more posted on #Foxfire when my blog is redesigned and I get back to posting.
The Blue Ridge Overlook located in Black Rock State Park near Clayton, Georgia. There are some amazing views here. #blackrockmountainstatepark #Georgia @gastateparks
Social distancing at #minnehahafalls in #georgia.
The Head of Tennessee Baptist Church in Dillard, Ga. Founded in 1819 and rebuilt in 1930. The church and associated cemetery showcase some amazing views of the north Georgia mountains.